As I promised, I am writing my first of many incoming reviews. This first one is a title from David Productions. which came out inbetween the First Series and Starlight Crusaders arc of Jojo’s Bizarre Adventure. As of late, I am a huge fan of the Neptunia Video Games (Playing Neptunia U as we speak), so naturally, I was very interested in the series. How did it hold out in my view?

If you are a gamer, you will get the injokes in the series. This one is an obvious one.

First off, I have said that I would not get the series if Funimation didn’t try to nab the Video Game cast. For the most part, to respect for Funimation, they nabbed most of the cast, save a few characters. IF, 5.p.b., and Peashy were all recast, but in the end, it turned out for the best. My fav character in the series is IF, so I was sad that her VA changed, but near the end, I couldn’t tell the difference. And yes, the tropes from the games are still there(BOING! I’m a Kangaroo!) And Arfoire still has her signature laugh.

The Gangs all here!

As to the way David Productions did the story, the first two and a half episodes went to going to each CPU’s homeland and intoducing all the main characters, and villians for the first arc. The second half of Episode 3 to Episode 5 adapted some of the MK2 storyline featuring the CPU Candidates. Episode 6-12 adapted the  Victory storyline (With an unexpected heroine showing up). And 13, being the OVA, wrapped up some threadlines to the series. While some people may not like this adaptation, I feel that David Production put some love into making this show, and it feels like its one of the better Video Game to Anime adaptions I have seen in the 20 years I have been a fan.

Pipes, Turtles, and Coins? Yep, we are in Lowee.

Thats not to say this anime was perfect. There was a few things I didn’t like in the show. Episode Two featured the Lowee characters, and a character from mk2 that should have stayed in the game. Trick, the character that is a big pervert, shouldn’t have popped up in the series. He’s one of the main reasons the mk 2 game was rated M, and while it was satisfying to see Vert and Blanc send him flying (literally), he turned the anime to something that would turn off people to the series.

See the problem with Trick? He does use the tongue in perverted ways. Oh, and Hey, Underling.

The story follows the aftermath of the console wars, when the CPUs, the girls who characterize the consoles (Except for Neptune, who is the characterization…of a prototype) decide to make a friendship treaty to try to gain shares fairly. You start to see right away that the characters have quirks to their personality. Noire is a classic Tsundere, Blanc is quiet, but can have a mean temper when ticked off, and Vert….well, she loves to flaunt what she has……to Blanc’s annoyance, and she’s a MMO junkie.

Vert’s in her room, playing her games…

Rating this show would be kinda difficult. If you haven’t played the games at all, it would be difficult to last past the Trick episode. If you have gone past that episode, however, you will see that this show is a decent homage to the game series. Out of a scale of 1-10, I give Hyperdimension Neptunia an 8 out of 10. I thouroughly enjoyed this show, and it paved the way to the awesomeness that is Starlight Crusaders.

Note: You can find the Anime Streamed by Funimation/Hulu, or nab the discs. 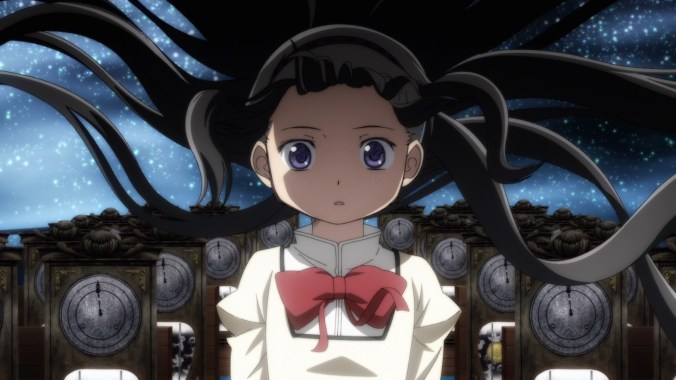 Sorry, Homura. Time is almost up. My Silence will be broken 8/1.

Yep, It’s finally time to end my silence. My next review will be Rebellion on 8/1 (Next Saturday)